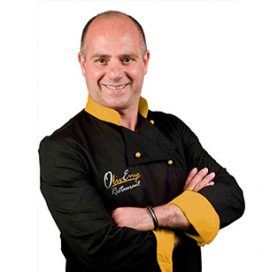 Enzo Oliveri is known as a passionate promoter of the Mediterranean diet, an International Hospitality Council and a judge and mentor at the 2016 Young Chef Olympiad. He also supports and works with the Italian national cycling team as a nutritionist and is an ambassador of the Slow Food movement.

Oliveri has spent the last 20 years in London. His newest restaurant in Piccadilly is called “Tasting Sicily Enzo’s Kitchen”, and specialises in typical Sicilian cuisine.

In February 2017 the “Federazione Italiana Cuochi” elected him as president of the FIC UK. (Federation of Italian Chefs U.K.)

He teaches at West London University and is famous for his TV cooking programmes with Michael Roux (Kitchen Impossible on ITV in the UK),  in Sicily with Aldo Zilli for ‘Aldo and Enzo in Sicily’ and BBC Good Food, Gordon Ramsay (Channel 4) and Paul Hollywood in City Baker for Food Network.